This evening we went for a walk! The best part of the walk was the precious time spent together that we were going for ICE CREAM! Here in St. Paul’s North End, we’re fortunate enough to have two locally-run (and tasty!) frozen treat spots pretty dang close together: Dar’s Double Scoop, and Conny’s Creamy Cone. 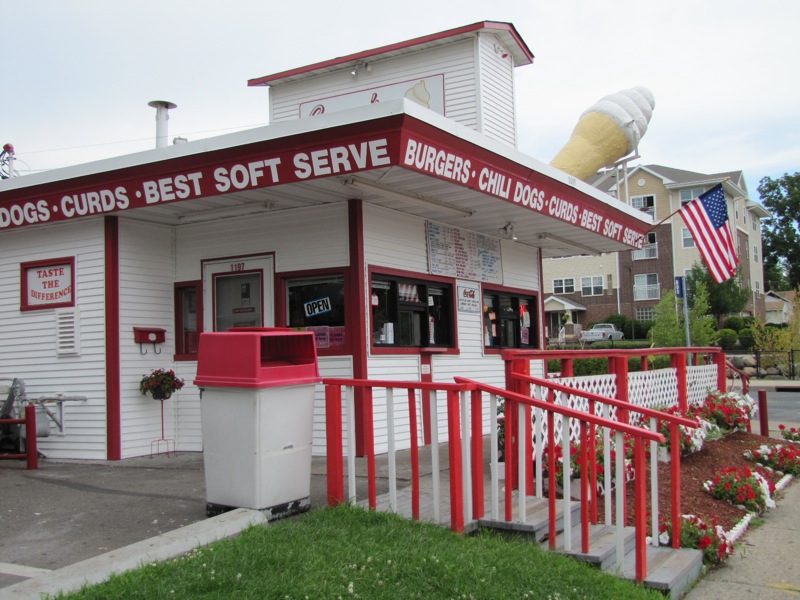 Conny’s is housed in a tiny little corner shopfront that screams “summer Americana.” With limited outdoor seating and a walk-up window, this is a March-October seasonal establishment. That just gives us all winter long to daydream about grabbing some creamy goodness and walking just a block or two over to Lake Como! It’s easy to make mediocre soft-serve, but Conny’s kills it with everything they do. They’ve got malts, they’ve got sundaes, they’ve got flurries — and we’ve personally never had it, but they’ve got non-dessert foods, too! It’s extra creamy, flavorful, and they don’t skimp on the fresh toppings.

One thing that Dar’s has on Conny’s is that it’s open year-round. It, like Conny’s, also serves non-dessert food… but, like Conny’s, we haven’t had any yet! Dar’s doesn’t do soft-serve, but that’s alright with us. There are 32+ flavors to choose from, and the usual cake cone/waffle cone/cup options. This is the kind of ice cream that doesn’t need toppings. A “small” gets you two healthy, firm, perfectly cold scoops that don’t melt all over the place. Plus, like all the best ice cream places, there’s a malted milk ball at the bottom of every waffle cone! Speaking of malt, the malts are as fantastic as you’d expect, with whipped cream and a cherry on top. We’ve gotta try that pizza sometime…

AK is partial to cake cones. Maple Nut on the bottom, Rocky Road on top!

Thanks for bein’ around, Con-Dar’s!