This one is not for SPom.

We’ve now celebrated hoagies twice already. But today is when we put aside naming differences and realize what’s important: meat, oblong roll, insert into face. Our way of celebrating was ordering Jimmy John’s on a lazy Sunday morning. 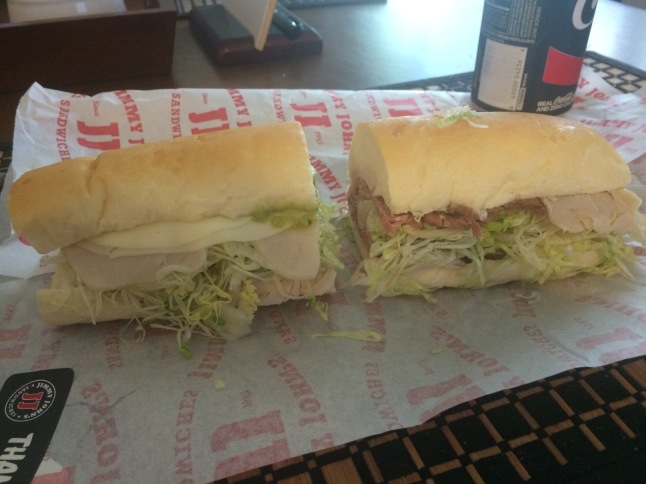 Left: AK‘s Beach Club. Right: SP‘s Bootlegger. Both without the tomato and with extra onions.

Also celebrated today is moldy cheese. We both love cheese, ranging from aged sharp cheddar to the mozz you put on a pizza to the stinkiest of French cheeses. It’s really good stuff. Recently, we’ve had a few times where we pick up one of the small slivers of cheese at Lund’s & Byerly’s – they’re about $1 to $2 for a taste of a cheese and we just share them as a snack. Good stuff. This time we went a little larger just to make sure we could celebrate the day.

But wait a second. Moldy? Yes. From the same genus that brought you the miracle of penicillin comes a particular blue mold culture distinct to “blue” cheeses. Yes, it was probably discovered by accident. But it was a divine accident. Some still deny how great blue cheese is because they get stuck on the brevibacterium – it’s a bacterium that grows plentifully on human skin and causes that distinct foot odor. It’s not the kind of bacteria that causes the worst of smelly feet (that’s Kyetococcus sedentarius) so get over yourselves.

St. Pete’s and some Societe Roquefort

That’s right, blue ribbon winners, we are celebrating some breaded, fried chicken! Some claim that this thing is just Schnitzel with cheese. Origins date back to the mid-20th century, and it’s not actually that French of a dish, as far as we know. But it’s tasty!

We had trouble finding a place that makes it. As Monday nights are the nights for SP and his friends to hang out, we didn’t want to go to lengths to make the stuff at home. Seems to be a recurring theme for SPAK that things are hard to find and we have to resort to things like Jell-O Mousse!

Anyway, we took a trip to The Muddy Pig in St. Paul. SP called ahead to make sure they actually had the Cordon Bleu we wanted. And they claimed so! But then… well, we won’t go into it but it wasn’t the most pleasant experience. Sometimes these things happen.

With some dill-sauced mashed potatoes. Yay.

Tomorrow is going to be one of our favorite days of the year. National Caramel Day, National Raisin and Spice Bar Day, but most importantly it’s National Deep Dish Pizza Day.