Sponge cake doesn’t exactly seem all that exciting. Buuuuut, it’s got some good history. Most cakes were yeasted throughout humankind’s baking. The first historical record of a non-yeast cake was in 1615 by a guy who wrote a book about how to be a good housewife (i.e., a book about recipes and remedies). Yeah. This guy. This book.

But you’ve gotta dress it up. SP‘s sponge cake with reddi wip, raspberries and bananas, topped with a bit of hot fudge. 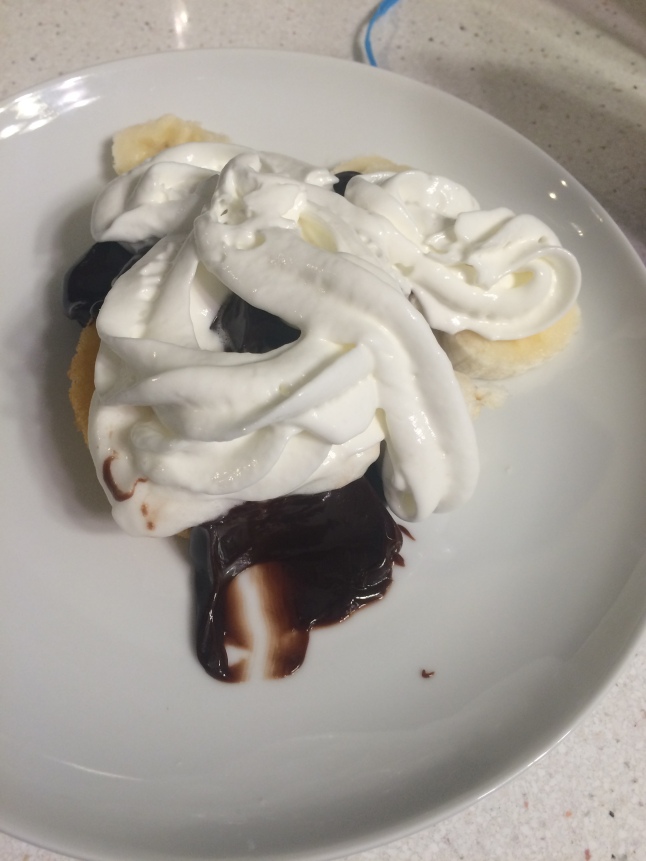 AK‘s sponge cake with… well… stuff on it. I guess.

Can we pledge to be done with raspberries for a while?

We’ve talked about raspberries enough. They’re a good fruit and they mean well. When seedless, they are a popcorn-level fruity treat. Goes great with desserts. Like this one, thanks to HyVee! 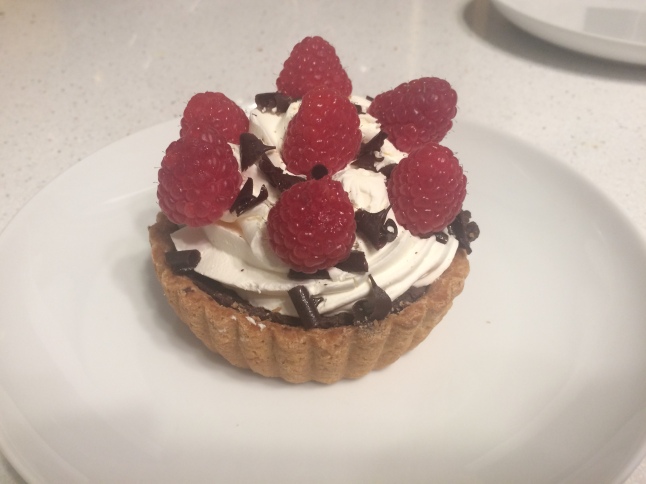 Had enough of raspberries?

[Fruit] and cream has been done before. Twice this year. And raspberries have been featured here, here, and here, with another raspberry day coming this Thursday. So now we put raspberries in cream.

Now this one SP can handle. He and SPom used to make these yogurt/jell-o pies quite a bit back when he lived with the SParents. It’s simple and really fun and light. 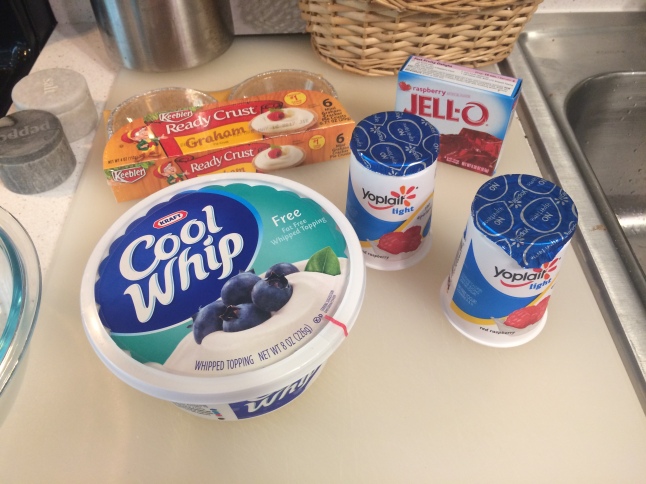 Use the whole pack of Jell-O but with only a quarter cup of boiling water. Mix it reeeeally good. 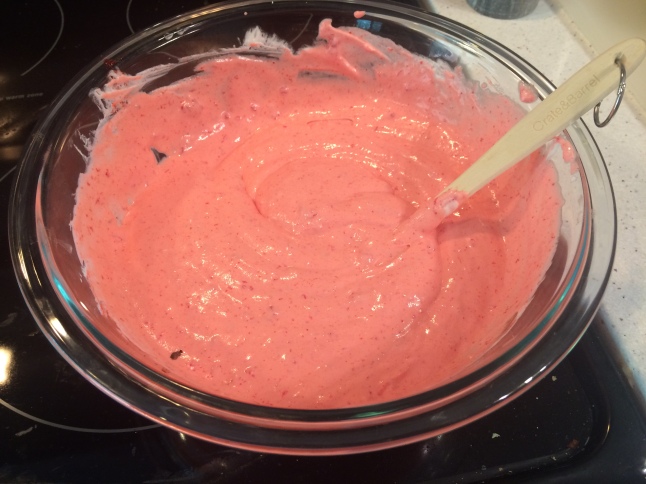 Add in the yogurt and 3/4 of the Cool Whip tub.

Normally we would use one graham cracker crust, but these looked too cute not to try. 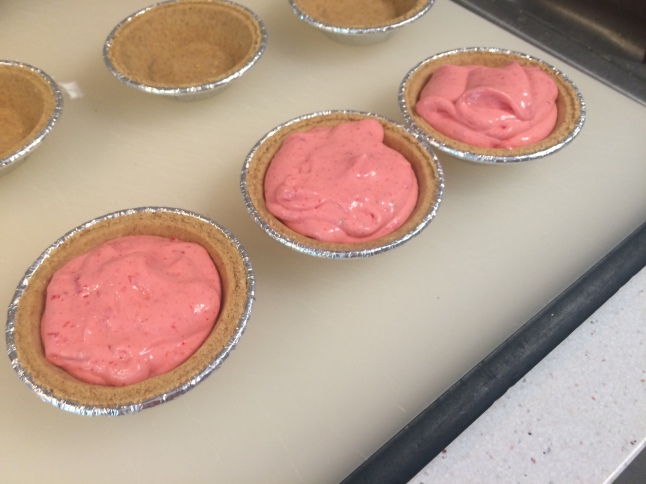 Fill each with the goo.

Plop a raspberry on top and refrigerate for a couple hours until they’re set.

Very tasty and refreshing! Go try it for yourself. It works for lots of flavors, too. We’ve tried Strawberry, Key Lime, and a bunch of others. Really, it depends on what Jell-O you can match with a yogurt!

Blow a raspberry at someone!

Jump for Jelly Beans day is NOT Jelly Beans Day. Been there, done that. Instead, today celebrates the acting of jumping for said beans. Why? Enthusiastic leaping is just something that needs to be done. If SPAK were to invent a few holidays in this vein, only to revisit foods we love, we might include

or other obnoxious titles. Still, we force ourselves to continue on the tradition of food holidays so… SP put the jelly beans on the top shelf of the cabinet.

AK had a recipe handed off to her from cousin SPamy for a raspberry cake. Essentially, you take a white cake mix and infuse some frozen raspberries into it, making it very pink. 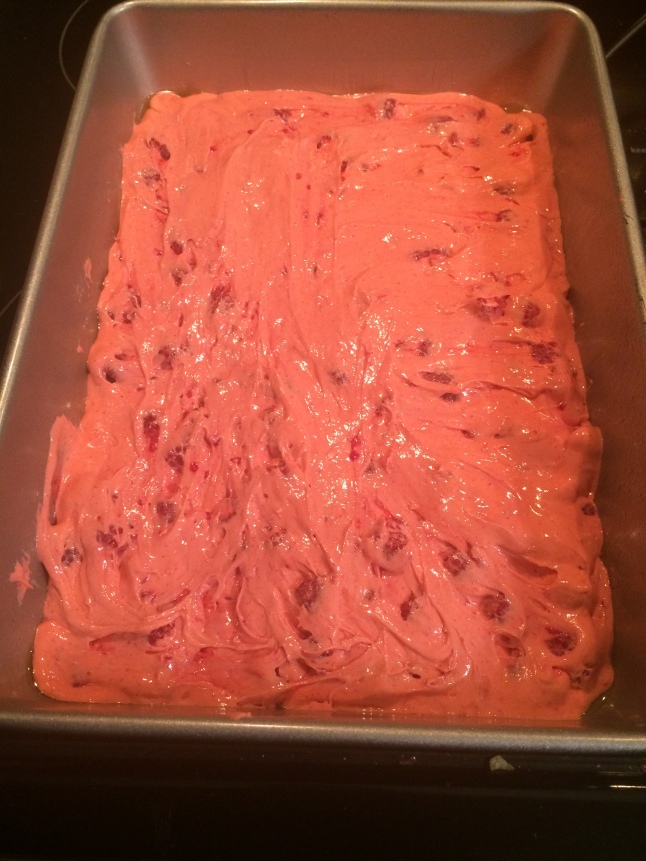 Ooooooooooh hurts your retinas, don’t it? 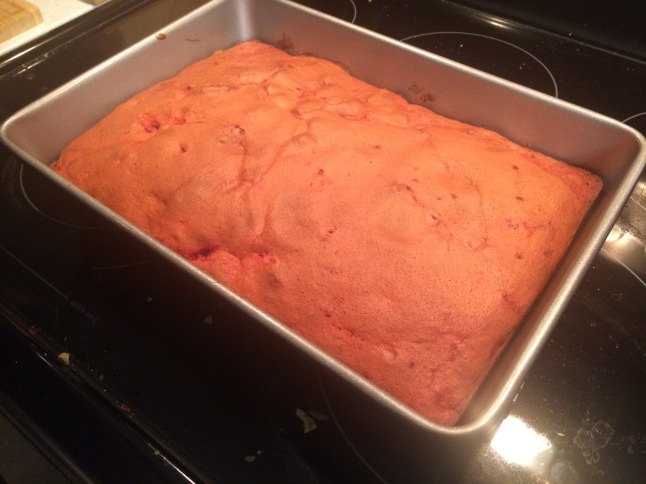 Overall, pretty good. Could be better, but we did what we had to. We’ll try again tomorrow for National Raspberry Cream Pie Day! Somebody needs to use up their raspberries we guess…

As everyone we talked to was excited to celebrate donut day last Friday, we imagined that people would similarly get excited about jelly-filled donuts. Well, as it turns out, as you get more into niche kinds of donuts, people are less pumped up. And if you’re like AK you prefer the donut to the jelly. In fact, her inexperience with jelly-filled donuts was apparent when we went to pick out a donut at the grocery store and SP could immediately tell which donuts were filled with custard, raspberry, and lemon, without a sign or anything. He’s magic.

For this outing, we picked raspberry. 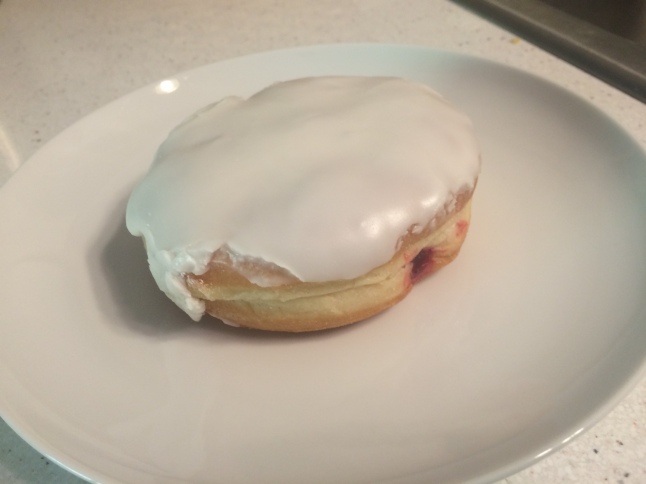 So good. By the way, if you aren’t cutting it open… pro-tip: your first bite should be at the jelly-injection location.

It’s also National Teacher Appreciation Day. We appreciate SP and the work he does, as well as the many many other teachers out there who are breaking their backs to help serve the public. We salute you! And we will celebrate by eating some food.

When we think custard, we think Frozen Custard. And when we think Frozen Custard, SP immediately interrupts the conversation and talks about how Bobby’s is the greatest thing on the planet and nothing can even come close. (I’m looking at you, Ted Drewes, he says.) Unfortunately, Bobby’s is about 9 hours away from here. So instead we go to the Midwestern chain favorite, Culver’s.

A dish with one scoop (approximately 5 fl. oz.) of chocolate frozen custard is 280 calories. For the equivalent, you could eat over a half pound of tuna. You choose what’s worthy of you.

Good stuff! But that wasn’t dessert enough for us. We had a light dinner (can you believe we are saying this) at Chipotle thanks to their Teacher Appreciation Day special, so we saved up our points for the day for some custard and some raspberry popovers. We used essentially the same recipe as Blueberry Popovers Day, but with raspberries!

Mix in 1 cup of flour 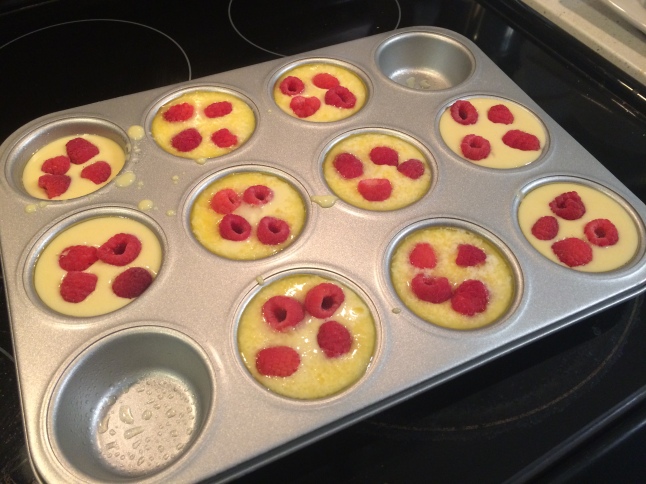 Put some raspberries in…

1 Tbsp of sugar and 1 tsp of cinnamon 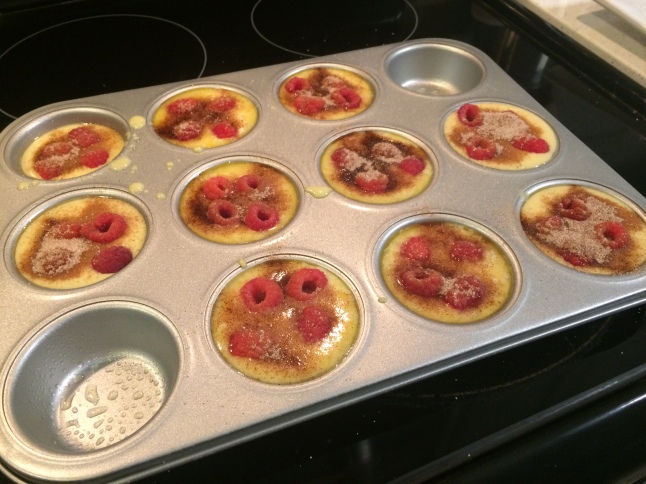 Sprinkle that stuff on the top of each.

Bake at 350 for about 30 minutes and boom! Raspberry popovers.

If SP were a smarter, more patient man, he could have strung together a nice time lapse of the popping over. That’s ok. The taste was good. Leftovers for the masses!

SPAK will snack.
Create a free website or blog at WordPress.com.