Relatives of this guy, no doubt.

It’s even tough to spell it! It’s basically a portmanteau of the words “boil” and “simmer.” Kind of vague for what this thing is: a fish stew. A really tasty fish stew. But there’s all sorts of tradition surrounding this thing that you have to adhere to:

-The ingredients have to be added one by one rather than all at once. Talk about inefficiency for the sake of taste.

-You have to make a rouille, a garlic egg-yolk mayonnaise, and serve it on toast with the soup.

-Serve the soup really hot, with the fish on a separate platter.

We went to one of the only remaining restaurants of the Twin Cities that still serves Bouillabaisse (now that Vincent is closed), Sea Change. It’s a pretty lovely restaurant connected to the historic Guthrie Theater. 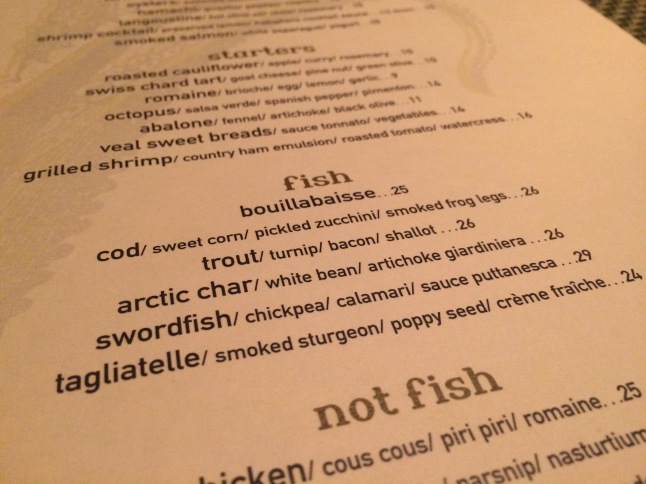 Needs no explanation on this menu. Only for the enlightened.

The rouille is on the bottom of the left piece of toast because SP was clumsy and knocked it over. 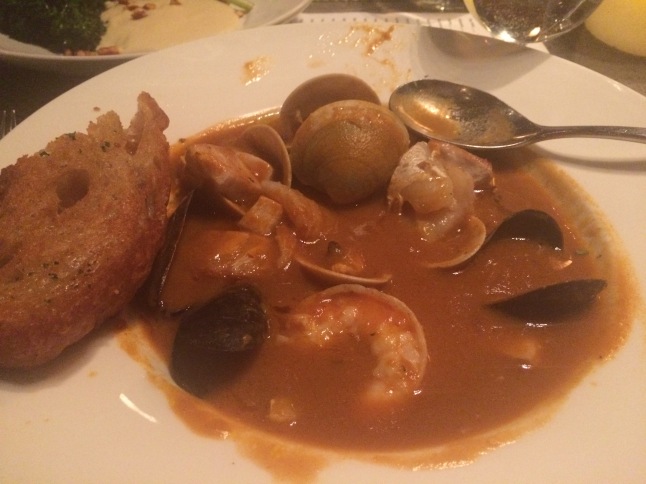 A view with the toast removed.

Really hearty and delicious. If you like seafood, this is definitely a winner.

Bubba is right: there are a hell of a lot of ways to prepare shrimp. And thas about it. There’s something very satisfying about the texture of shrimp and how well it picks up flavors from things around it whether that’s cocktail sauce or seafood etouffee.

We made a shrimp stir-fry tonight in honor of Shrimp Day! 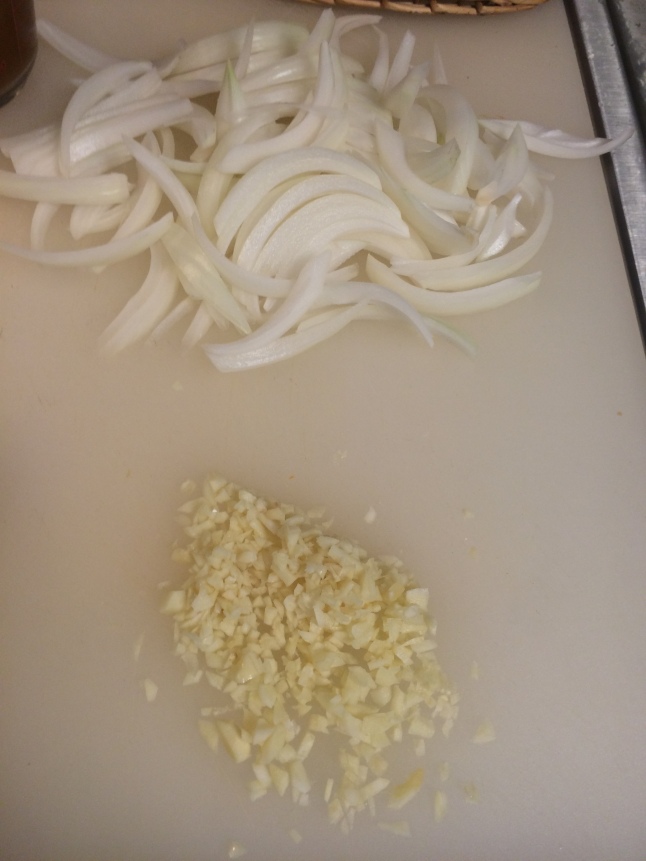 A hell of a lot of garlic, and some onions. 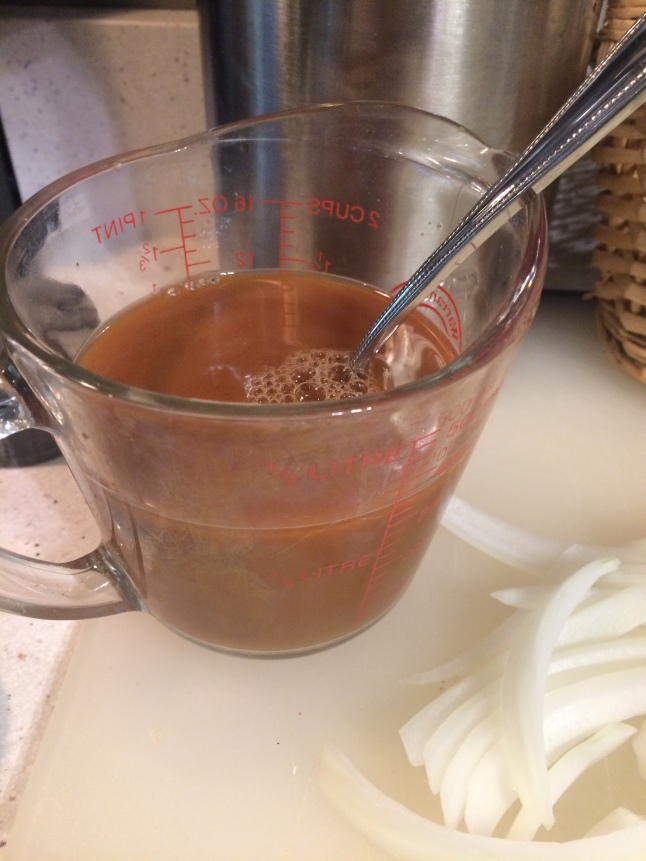 The best chili oil ever made. 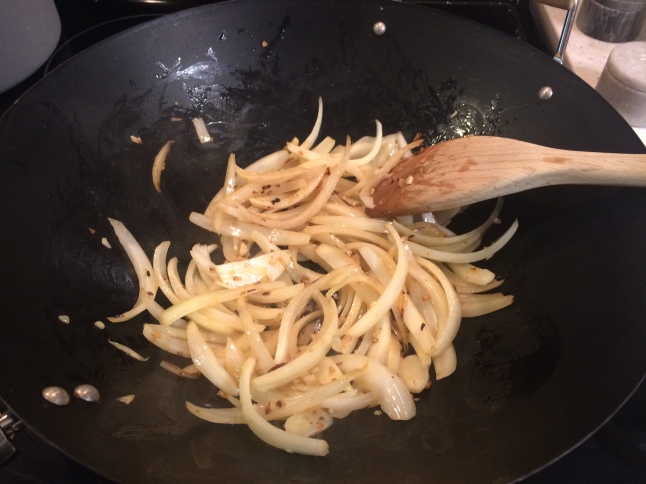 Fry up the garlic and onions in a tbsp of the oil.

Tomorrow is National Eat What You Want Day!

A pound of shrimp with some salt and pepper

Parsley and garlic. The more garlic, the better.

2 Tbsp of butter in a hot skillet. 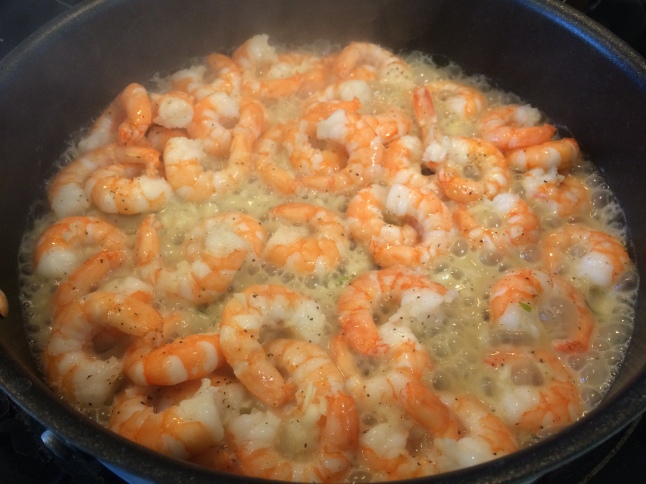 Toss in the shrimp, and then the garlic. Let it all foam for a while. Not pictured is the “sauce” made afterwards of sherry, parsley, and lemon juice. 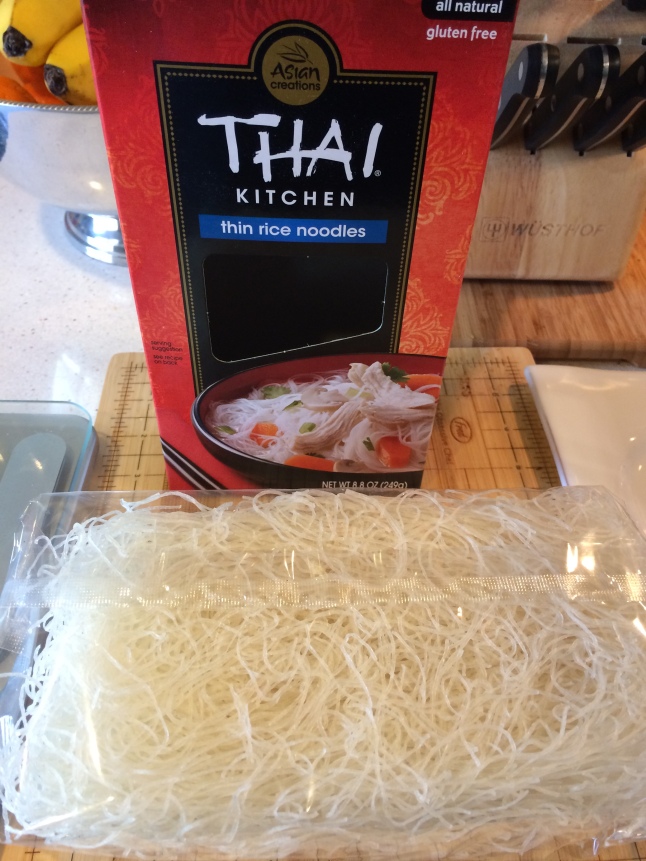 It was really, really good. We had fun!

No bunnies and eggs…

There’s something about the time of Easter that coincides with a spike in Ham sales. If there’s one dish that should celebrate the resurrection of one’s deity-person, wouldn’t you think that you would pick something that isn’t blatantly against that deity-person’s religion? Well the Christians are at it again, picking holidays to celebrate with seemingly randomly decided foods.

We got our baked ham from Honeybaked Ham. They have a storefront pretty close to our house, so SP waited in line patiently for a pound of meat. On Friday, that line was out the door with people gearing up for their Sunday holiday. And while it was just a Sunday for us, it was still tasty. AK peeled, cored, and chopped the pineapple for us and we had a quaint lunch.

Nothing says sacred like this combo, am I right? 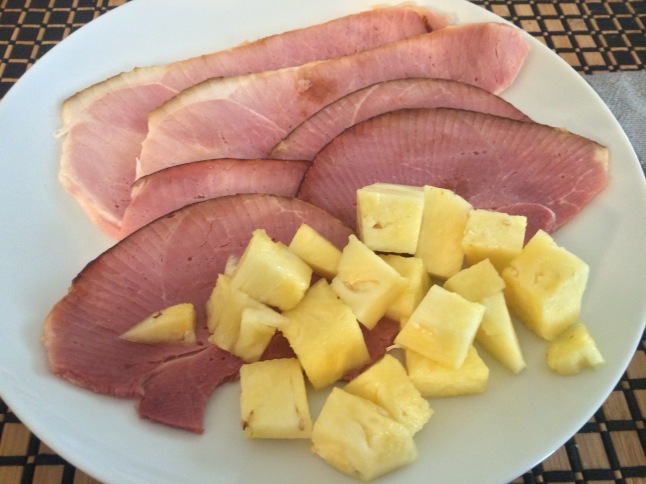 Just look at how well this resembles the Easter holiday!

Well in another area where there’s a wealth of Christianity, there was another dish that was decided for March 27th completely unrelated to Easter. Spanish Paella, invented by the Valencians, is basically a Spanish Jambalaya. Or maybe Jambalaya is the Creole Paella. Rice, saffron, and some sort of meat. Apparently it takes you back to your childhood. It’s really hard to go wrong with that combination, especially when SPom offered to make it for today’s holiday.

Recipe was courtesy of my cousin’s wife’s father. 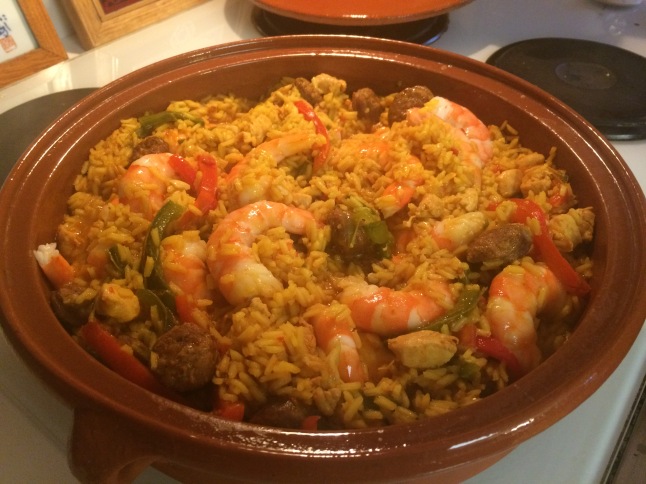 Look at this beautiful Paella pan!

It was just so good. AK pretty much melted. It’s got the multitude of textures between chicken and shrimp, creamy rice, peppers… Every bite you get a whole bunch of flavor and your mouth initially just POPS. As you chew down, your tastebuds start to decode what is going on. That saffron smell that floats into your nostrils and the heartiness of the Spanish rice… Man! We want more! Thanks, SPom.